Kernel News
A little no52:04te about the kernel releases this week. Once a month we record on Saturday afternoon instead of Sunday morning after our LUG meeting. So when Linus releases to late to get the rc in it rolls over to the next week.

If you have not been under a rock this last week you have heard Mark Shuttleworth shouting how Ubuntu has overtaken Red Hat. Well he is correct Ubuntu did over take Red Hat. If you look at the number of web server deployments, as established by W3Techs (http://w3techs.com/), you see that on March 1st, 2011 Ubuntu had 13.1% while Red Hat had 15.3%. Pretty close together but Red Hat did have the lead. Then you look at March 16th, 2012 and Ubuntu is at 18.4% and Red Hat is at 12.2 so yes they have overtaken Red Hat and by a significantly larger percentage than Red Hat was beating Ubuntu.

What Mark Shuttleworth doesn’t tell you is that Red Hat was not number one and Ubuntu is currently not number one. What basically happened was number four and number three traded places. If you take a look at all of the numbers for the top eleven Linux based web server deployments (http://w3techs.com/technologies/history_details/os-linux) we see that Debian and CentOS are basically in a dead heat on March 1st, 2011 with Debian at 28.6% and CentOS at 28.9%. Then when you look at March 16th, 2012 Debian has risen to 30% and CentOS has remained at 28.9%. Which makes Debian not Ubuntu the Alpha Dog. Put that in your pipe and smoke it Mr. Shuttleworth. If your curious, and you should be, you can see the way W3Techs arrives at their figures here (http://w3techs.com/technologies)

There is a reason that I use Debian for most servers, rock solid and no frills, just what you are looking for in a server. In all of my clients server rooms that I have control over what the servers run it is overwhelmingly Debian with the occasional CentOS box, never ever Ubuntu though. So now I am going to sit back and enjoy a Frankenmuth Brewery Munich style Dunkel Lager.

The “Spark” Gets Renamed “Vivaldi”

A trademark issue has forced the renaming of the new tablet that is going to be running KDEs’ Plasma Active desktop. The KDE project leader and creator of the tablet Aaron J. Seigo had this to say:

“ran into a problem with trademark for the name we had chosen, and this pushed us back to the drawing board… This may have been a blessing in disguise as we looked into some of the broader pictures around this topic. In the end, we decided to go with a musical theme that celebrates some of the brightest lights in human history when it comes to making, playing and living interesting lives.”

I could not find the exact trademark issue that caused the renaming.

The website taking the pre-orders for the tablet, MakePlayLive, has updated the website to reflect the name change. Pre-orders have also been closed for the tablet as they have reached the capacity of the initial product run.

Of the 270 London underground stations Virgin Media will have 80 of them wired for free wifi by the time the Olympics rolls around. With another 40 in the offing by the end of 2012. The service will only be in the stations, it will not extend into the tunnels or onto trains. The big catch here is that as soon as the last Olympic tourist is out of the city the service goes into a pay by the minute service for access. If your a Virgin Media customer then you will get free wifi indefinitely, also if you are only looking for travel information that will also be available for free. This is what Virgin Media had to say on the subject:

“With the eyes of the world on London this summer, we’ll be showing off our capital as a leading connected city on the global stage. We’re putting the power of Virgin Media’s fibre optic network in the hands of millions of Londoners, commuters and visitors and are delighted to be launching Wi-Fi for free throughout summer 2012 and beyond.”

Nobody is talking about how much the cost is for this undertaking except for the official statement of this “is covered by the commercial contract that has been awarded to Virgin Media”. What does that mean, well I believe it means that Virgin Media is sucking up the cost of the initial roll out hoping to make it up on the back end.

DoCoMo’s Syabette Concier beats Siri in a fair head to head test in Japanese. When asked for directions to the hospital the DoCoMo app provides them without even blinking and then when Siri is even given a second chance it still does not produce directions. Then it completely mishandles a simple request for a curry recipe while the DoCoMo app serves an answer up straight away. See a video of the test here (http://www.youtube.com/watch?feature=player_embedded&v=1FaeYavOLgc), it is entirely in Japanese so unless speak Japanese you will only be able to see that the results are not the same but not know what is being searched for.

This is not the first time Siri has taken a header into the shallow end of the pool. After Motorola claimed that the voice recognition on the Atrix2 was significantly better than Siri Gizmodo put it to the test. When the testing was complete it showed definitively that even with just the default software Android was far superior to Siri.

I think everyone is missing the point here however. People do not buy Apples products. They buy them for the cache, they buy them because they are Apple products. So all of you Applephiles can go right on using your inferior iPhones and the true lovers of superior technology will keep right on using those Androids.

Now for a little fun go and check out this satirical add for Siri – http://www.youtube.com/watch?feature=player_embedded&v=MVEw0Ca09tc

User sues Apple saying Siri not as smart as advertised

iPhone 4S user Frank Fazio wants his money back and is suing Apple to get it. According to a post at CNET News, the disgruntled consumer says that the company has dramatically oversold the capabilities of its Siri information system.
In the commercials from what the lawsuit calls Apple’s “multi-million dollar advertising campaign,” the operating system functions like a highly capable digital personal assistant. Many iPhone 4S users, however, are finding that their experiences with Siri are more like the story documented in Fazio’s complaint.

Judge orders failed copyright troll to forfeit “all” copyrights
Righthaven, a copyright-troll law firm that failed in its attempt to make money for newspapers by suing readers for sharing stories online, was dealt a death blow on Tuesday by a federal judge who ordered the Las Vegas company to forfeit “all of” its intellectual property and other “intangible property” to settle its debts.
The order is an ironic twist to a copyright trolling saga that began in 2010, when Righthaven was formed with the idea of suing blogs and websites that re-post newspaper articles or snippets of them without permission

So what are those two digits anyway…
This article provides a clear description of fstab, especially the two digits at the end of the partition mount point line – http://www.linuxstall.com/fstab/ G.W. Childs, sound designer and prolific author of Your Free Open Source Music Studio, offers valuable information on low- to no-cost options of the very latest music-making technology as well as insight from do-it-yourself musicians and producers. With easy-to-follow tutorials and helpful graphics on how to use a wide variety of open-source programs, readers delve deep into the world of pre-screened, useable, and reliable music shareware, freeware programs, including various multi-track recording programs. Various available plug-ins are also covered, from virtual instruments to correctional plug-ins, as well as stereo audio editors like Audacity, which are a necessity for mastering, destructive edits, and more. 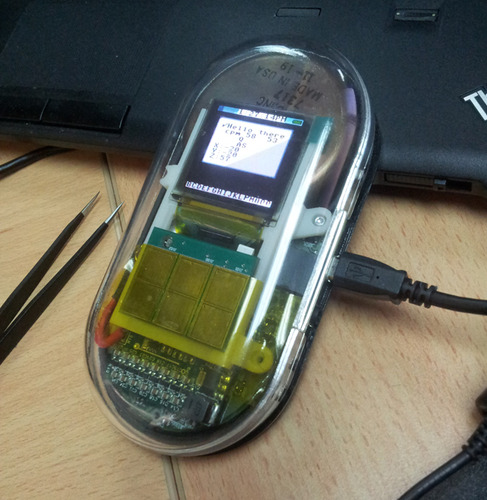 When Andrew “Bunnie” Huang, Chumby co-founder and author of Hacking the Xbox: An Introduction to Reverse Engineering, saw Japan devastated by last year’s earthquake and tsunami, he decided to help by designing a stylish radiation monitor that could be used by normal humans, unlike the bulky instruments available today. He details the design process on his blog, from the very beginnings of the project as he partnered with Safecast, to his movement through several different design approaches. Original sketches called for a smaller, compact device with an incorporated flashlight, but the necessity of certain Geiger tubes drove things in different directions, including an all-white design that displayed influences from Wall-E’s Eve, to the final black model with an OLED screen.

If you know: email show at smlr.us

“Linux for the reset of us” is a Podnutz.com podcast and they talk about
us and quotes Mat’s article about the linux desktop overtaking windows
in 59 years. They go on to say how they like Mary!