“So really Rasberry Pi and Broadcom – get a big FAIL for even bothering to make a press release for this, if they’d just stuck the code out there and gone on with things it would have been fine, nobody would have been any happier, but some idiot thought this crappy shim layer deserved a press release, pointless.”
–Dave Airlie

Since it’s the season of Hallowe’en and ghosts and goblins, I decided that I wanted a distro that reflected the spirit of the season. What better distro to review than Alien Section OS (http://www.aliensectionos.tk/index.html). According to the distro’s site, Alien Section OS is an Openbox operating system based on Crunch-bang/Debian, Ubuntu, and Linux Mint. That’s right! Instead of a single Linux distro with multiple desktops, we have a single desktop on top of multiple distros—but not at the same time, of course.

Now you may be wondering how all of those distros are rolled into a single distro—is it a five-headed ugly alien baby or will is it an attractive sleek spaceship. Let’s find out.

Out of the Alien Section OS mother ship we have:

I downloaded and burnt to disk, the 687MB Debian Squeeze edition Alien Section OS. The Alien Section OS CD booted easily to a live environment, a welcome change from a few of my recent distro reviews. The familiar Debian swirl, albeit in a lovely swamp green hue, greeted me . Perfect! Emblazoned across the desktop are the words SQUEEZE ME all caps in a Hallowe’en like font. All of this delightful spooky goodness sat on a background that sported electronic glyphs with a sprinkling of matrix-like drips frozen in time on the right. One of the more eclectic desktops wallpapers I have seen.

Conky sat on the right, tracking system vitals. Everything looked good. Included in that thumbs-up assessment were my two favorite items:

Graphics/Display: ( i915)
Wireless:  (iwl3965) An interesting note: When I first tested AS-OS live on my Zareason, the iwl4965 driver was loaded. It was nice to see AS-OS adapt to a different wireless chipset.

Those of you who are familiar with OpenBox will know Adesk Bar, the lightweight app launcher at the top of the screen. Someone like me, who does not use Openbox on a regular bases would say that this panel resembles the upper Gnome2 panel in earlier versions of Ubuntu. Gnomish, I guess.

The bottom of the screen –just where you’d expect the task panel to be is neatly divided into four desktops. What I particularly liked about this arrangement in Openbox is that you can see the applicatins that are open across all your desktops. Seems convenient in my opinion.

Alien Section OS uses the Refracta installer. At first I thought this installer is named after Refalca, Ann Romney’s Dressage horse, but I was mistaken. It’s name is derived from the Refracta OS. Here is the link: (http://www.ibiblio.org/refracta/) Dressage/hip-hop horse: http://www.youtube.com/watch?v=knCj92zA0tU

The installer is very minimal, which made me a little cautious, especially when I planned to install it on a slice of my hard drive on my main laptop. So I resorted to using my Bemus hosting laptop and temporarily overwrote Chakra by installing Alien Section in the first partition. I left my LFS partition alone but I will probably have to recreate the environment when I get back to it next week. 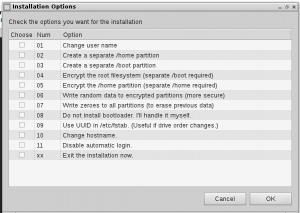 Bulk Rename – A thunar-based renaming utility
X11 Keyboard switcher –Sits in the system tray and allows you to switch betweenGB, US, DE, and FR keyboards on the fly
Refracta Installer – An installer that is part of the Refracta OS.
Catfish – This program acts as a front-end for different file search engines. It can be configured via the command line.
ImageMagic – the GUI front-end for Image-magick. A very nice addition for anyone who does not want to wrestle with the command line!
Nano – My new favorite text editor (after Kate) is set up as a menu item.
Fortune – a little fortune-telling application.

Dell donated a new concept server based on the ARM processor to the ASF (Apache Software Foundation). The server uses Calxeda’s EnergyCore processor architecture. The goal here is so ASF can test and optimize Apache, Hadoop, and the Cassandra NoSQL database for these new servers. The Dell “Zinc”, is being hosted by Calxeda in a data center in Austin. Along with the server they are also giving them full technical support and maintenance. The ASF is already using the server and has built versions of Apache Hadoop, Thrift, Derby, River and Tapestry. The build server is running Ubuntu Server for ARM. The Zinc concept runs EnergyCore EXC-1000 processors that are integrated with layer 2 networking switches on Calxeda’s EnergyCard boards. These servers are not available for purchase from Dell yet but they definitely coming. Here is what Dell said about when:
“bring ARM servers to general availability at the appropriate time.”

Ted Ts’o has released a series of patches to correct a bug he has dubbed the “Lance Armstrong bug”. Because nothing untoward shows up in testing but, nevertheless it performs with unexpected results. The bug was tracked down to the release of 3.6.2. It was a tough bug to track down as it requires that you reboot your computer twice in a short period of time. It further requires you to shut the machine down while it is in the process of unmounting the file-system with an already compromised journal. Developers are still working to pinpoint the exact problem and it might actually involve more kernel components than just the ext4 drivers. This bug requires a very specific set of conditions for it to surface. So it is very unlikely to affect almost all users.

Amazon accused of remotely wiping punter’s Kindle
It’s bad enough that when you ‘buy’ an e-book, you’re really only renting it, but now we hear that at least one e-book seller will, it has been alleged, wipe your device if it sees fit.

Norwegian writer Martin Bekkelund tells the story of a chum, called Linn, who claims to have had her Kindle remotely wiped by Amazon UK.

Cory Doctorow’s take on it

Google Drive opens backdoor to Google accounts
The Windows and Mac OS X desktop clients for Google’s Drive file storage and synchronisation service open a backdoor to users’ Google accounts which could allow the curious to access a Drive user’s email, contacts and calendar entries.
The sync tool includes a “Visit Google Drive on the web” link which opens Drive’s web interface in the default browser and automatically logs the user in. Somewhat problematic is the fact that this session can then be used to switch to other Google services such as GMail and Google Calendar.

Storm Linux is based on Debian, and includes its own Administration system for easier network setup Includes GUI installation.

Lunar is a source-based distribution for 32 and 64bit Intel or AMD systems with simple, yet powerful package management and system administration tools. If you want a flexible system built from source that is easy to install and maintain, you should try Lunar!

Its primary goal is to provide the best home or dorm-room desktop environment possible.. No longer will you have to spend a week compiling downloaded programs to have a usable environment and NEVER will you have to boot into the outdated, unstable, piece of dog shit called MS Windows (especialy since EvilE blows out your Windows partion during the install — for the good of mankind of course).

Devil-Linux is a distribution which boots and runs completely from CDROM or USB flash drive. The configuration can be saved to a floppy diskette or a USB pen drive. Devil Linux was originally intended to be a dedicated firewall/router but now Devil-Linux can also be used as a dedicated server for many applications

Sorcerer is a source-based Linux distribution. Source tarballs are downloaded directly from software project home pages or as patches when an old source was previously downloaded. Sources are compiled for the architecture and with the optimisations that the system administrator specifies. Sorcerer has both command-line and menu-driven source management programs.